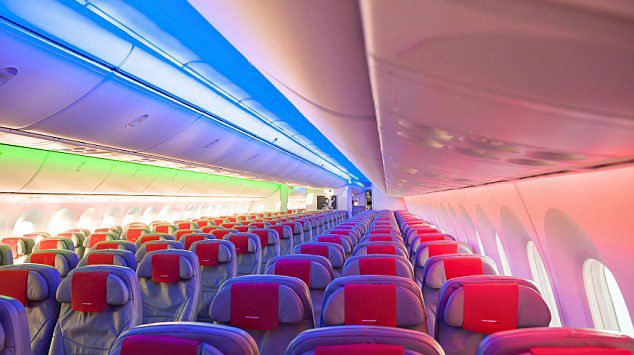 Norwegian Air Shuttle has received a tentative approval to offer flights between the US and Ireland, and the US and the UK, starting as low as $65 one way.

Last year, I was on a Norwegian Airlines 787 Dreamliner from Ft Lauderdale to Copenhagen. I have to admit it was one of the best flights I’ve ever taken! The comfort was bar none and the interior lighting is tranquilly amazing. Here is my take on the Norwegian Air Dreamliner review.

This post may contain affiliate links. If you click on something and make a purchase we may make a small commission. Also, as an Amazon associate we earn from qualifying purchases. For more information, please see our Disclosure Statement about all our affiliations.

The flight left at 11pm and frankly I was so exhausted that I fell asleep even before take off. I know I slept for a few hours because I had a meal in front of me which was cold to the touch. But, I do remember giving my order to an attendant before dozing off again. After waking up a few hours later, I looked around and saw the windows on the right side of the plane with a green tint, kind of like the hue of the Aurora Borealis. The left side, where I was sitting, was a hint of blue/purple/rose. I didn’t think anything of it. It was really very calming and easy to continue dozing off.

After sleeping another couple of hours, I woke again. The same colors appeared and I thought this was very bizarre. After checking my watch, which I changed to European time, I thought we should be seeing sunlight at this point. Then I remember reading information that with the Dreamliner you control the light from outside with a dial on the wall below the window. And sure enough, the couple in the row ahead of me changed their view to ‘normal’. You could see bright blaring daylight, but the rest of the windows were subdued.

As always, travel insurance is a must have these days, and World Nomads has you covered.

The mood lighting in this plane was so spectacular that even in the most uncomfortable of positions in economy, I was able to sleep. I often don’t sleep much at all! Norwegian Air has received kudos as being one of the better European airlines, but this had to be the best trans-Atlantic flight I’d ever experienced in economy.

The seats are comfortable, which I do not easily say, having been spoiled by business class numerous times.

Norwegian Airlines is making headlines with a route from Ireland to Boston starting in 2017 for a mere pocket-change of $69. With cheap flights like these, I will be seeing a lot more visitors, whether I like it or not!

Be sure to sign up for Norwegian Rewards Frequent Flyer program and you receive cash rewards to use on future flights.

Thank you, Norwegian, for such a great experience.

I paid to take this flight direct and was not sponsored by Norwegian. But I can tell you that when I have a chance, I’m a Norwegian Air frequent flyer!

UPDATE: While there was clamour that Trump was being urged to block Norwegian’s deal to fly from Ireland to the US, that is no longer the case and Norwegian flies to 15 destinations in the US from various European cities in the UK and Ireland. What better way to get more Americans traveling and seeing Europe than to provide them a cost-efficient and great-quality service.