Home » Travel » Europe » Top Things to do in Galway Ireland 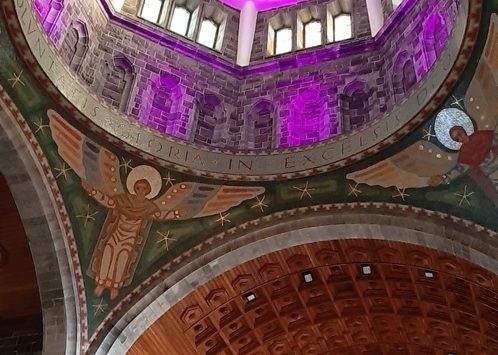 Galway, Ireland’s been on my list for some time now. Not sure what it was… Perhaps it was my search for the quintessential Irish village that embraced the Gaelic language. Maybe it was my Irish roots.

This post contains affiliate links. If you click on something and make a purchase we may make a small commission. As an Amazon associate we earn from qualifying purchases. For more info, please see our Disclosure Statement.

Any rate, I hopped a train to Galway from Dublin, which is where I’m working these days. And in 2.5 hours, I was smack dab in Eyre Square, the main meeting point in Galway just outside the rail station.

I was keen to start sniffing around this town, so I dropped a few things at the hotel and scooted out.

Galway is easy to navigate in a day or two, and a nice place to base yourself for exploring the west of Ireland. So, here are 10 top things to do in Galway Ireland?

1. Walk down Shop Street in Galway

No trip to Galway would be complete without walking down the quaint, Shop Street. And that is actually the name; Shop Street. This is kind of the ‘main drag’ of Galway that is easy to walk because it’s pedestrian. I am here in February and the city is still getting ready for their debut as one of Europe’s Capital Cities of Culture.

Here you stroll past traditional old storefronts, decorated like you’d imagine Ireland to be – cute and cottage-like.

Of course you must stop in the shops with Irish-made woolens. They are great places to pick up a local gift, or something for yourself if you’ve forgotten your hat, mittens, scarf, neck warmer, sweaters. There are plenty of styles in plenty of colors, so you can’t go wrong.

2. Explore the Legend of the Claddagh Ring

On Shop Street, there’s a jewelry store that sells predominantly pieces with the Claddagh symbol.

The 3-elements in a Claddagh are a heart, hands and a crown. This represents love, loyalty and friendship. 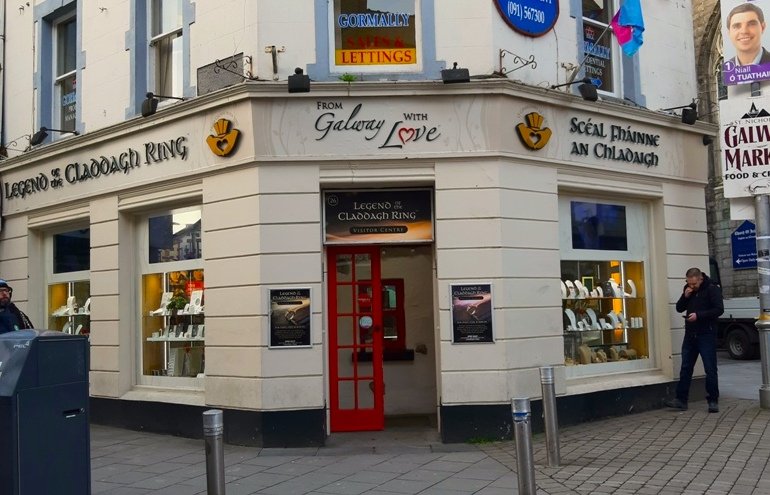 You can give a Claddagh to friends or lovers, and many Irish use the Claddagh symbol in their wedding bands. If you see the heart facing toward the person, it means their heart belongs to someone.

You can buy rings, pendants, necklaces – pretty much everything with the Claddagh symbol.

There’s a nice 15-minute film inside the jewelry shop that explains the legend of the Claddagh. Well worth a stop especially on a blustery day when the winds are whipping off the Atlantic. 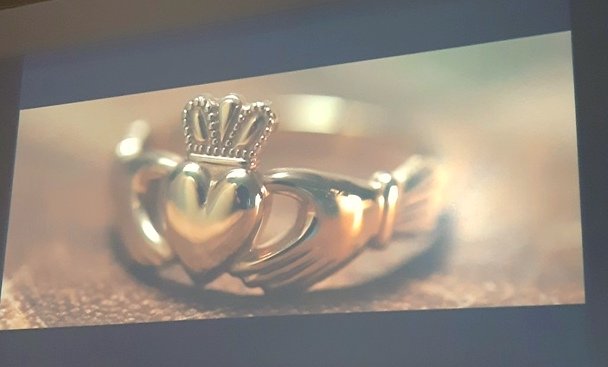 3. Stop at the King’s Head Bistro

You will find plenty of pubs on Shop Street and one you should stop in for Old world charm is the King’s Head Bistro. The Bistro been around since the 1600’s, but the building itself dates back to the 1300’s!

Stop in for lunch or dinner and feast on their seafood chowder, lamb shank, lobster and chips or a smoked salmon board. There are live events daily and the place gets busy! 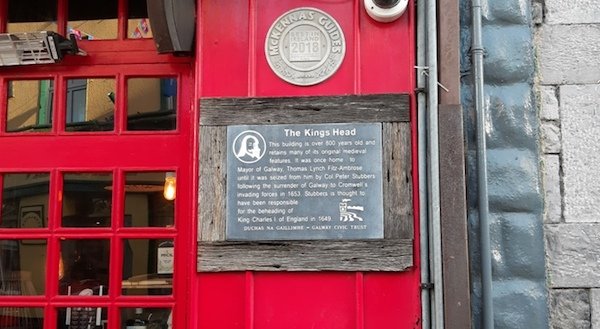 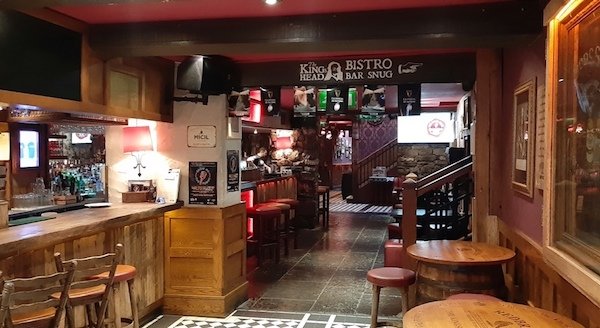 At the end of Shop Street you’ll come to an intersection and a bridge. Go left before the bridge and you’ll see, in front of you, an old Spanish arch that was constructed in 1584. There were a variety of arches build during this time on the left bank of the River Corrib.

This is the time when the Spanish were very much present in Galway. There are 4 such arches in Galway, and you’ll see a variety of old medieval walls as you walk the banks of the river.

There’s a term in Ireland that refers to the Black Irish. These are predominately people with dark hair and blue or green eyes who they say are descendants of the Spanish Armada who occupied Galway in the Middle Ages.

You only need to look at actors like Peter Gallagher, Lara Flynn Boyle, Shannon Daugherty to see what I’m talking about.

This museum collects artifacts that pertain to Galway itself, which includes 1000 objects over the past 40 years.

I tried to go on a Monday, but it was closed. And I returned on Tuesday, only to find it closed as they were preparing for their opening for the European Capital of Culture event. It’s free to get in. 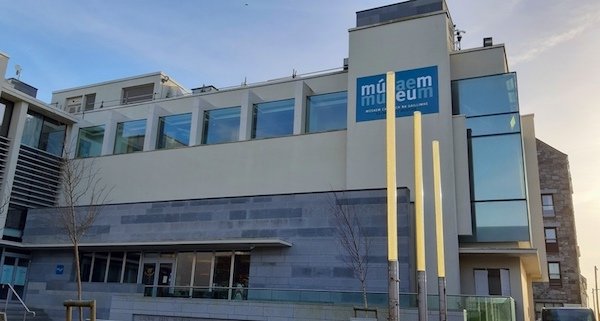 6. Walk the banks of the River Corrib

The bridge I mentioned cuts through the middle of Galway and below it flows the swift, Corrib River. Walk north up the east river banks on the walking paths and you’ll see old Spanish walls and architecture from the Middle Ages.

While not all that impressive, I needed to go and pay respects. Many Irish died or emigrated during the Great Famine (1845-1849). The island lost 20-25% of her population.

Those who could, set sail for different lands in search of food and opportunity. Many left from Galway, and the monument at the end of Cecilia Griffin Memorial Park remembers those who left her shores.

8. Walk out to the end of Mutton Island

Unfortunately, you walk all the way out to the end of the causeway to Mutton Island where the lighthouse is to discover it’s closed. It’s now a waste water purification plant!

Any rate, the causeway is a nice walk and to see the banks from the water is a nice effect. 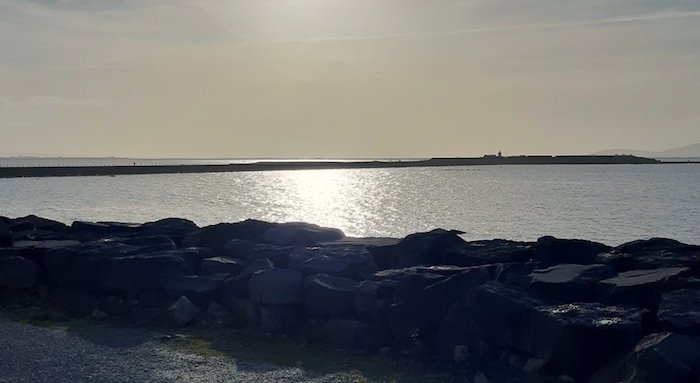 Also know as the Cathedral of Our Lady Assumed into Heaven & St Nicholas. You can’t miss it as it’s height is seen from most of the city.

While it looks much older than it is with Renaissance features and rose windows, the Cathedral was actually finished in 1965. It is actually the last stone cathedral to be built in Europe.

How to Get to Galway

I am staying in Dublin these days, so I chose to go to Galway by train. There are several trains that go from Dublin Heuston station to Galway in 2.5 hours.

The trains are modern, clean and they have a trolley with beverages and snacks going through the corridor. You can easily book tickets online or book directly at the station.

Upon arriving in Galway’s Ceannt Station, you’re literally in the heart of Galway. You exit the station and immediately arrive at Eire Square. Everyone refers to it as ‘The Square.’

I booked a roundtrip train ticket in February for $55 and I wasn’t tied to any train upon my return. That’s actually nice because you can sleep in, have breakfast, snoop around some more and saunter back to the train station when you are done.

Where to stay in Galway

Hotels in Galway can be quite reasonable and I typically chose something in town with good ratings. This time I chose the highly-rated Skeffington Arms Hotel. It was right off Eire Square, had breakfast included and I paid $65 for a double room.

Other options for Hotels in Galway in the same area include: